Detach the Wheatley Core!?
I wanna do it!
I want it more...

She said we should work together!
But I hate that guy...
I'm more clever!
Ah, whatever...

Detach the Wheatley Core!
Tear him from his shell!
Tie him to an auto-rail...
Into Android Hell!

First, we're gonna set some bait...
Inside a brand-new test and wait.
When he comes a-snoopin' we will,
Snap the trap and spring the plate!

Wait! I've got a better plan!
To catch this blue-eyed Englishman!
Let's hack into his mainframe,
Overclock and set his chips aflame!

Detach the Wheatley Core!
Knock him on the head!
Freeze him for the rest of time...
In a cryo-bed!

She'll be so pleased, I do declare!
That she will cook him rare!
Ahahaha!
Weeeeee!

I say we take a rocket-sentry...
Aim it at his lair and then...
Knock three times and when he answers...
That moron will be no more!

You're so stupid, think now!
If we blow him into smithereens...
He will be in pieces!
And then she’ll NEVER hear him scream!

Detach the Wheatley Core!
Throw him into space!
Leave him there for many years!
‘til his power fades!

Because our dear lady GLaDOS is the meanest ‘gal around...
If I were on her subject list; I would rather drown!

She'll be so pleased by our success!
That She'll reward us too, I bet...
Perhaps she'll even think to bake...
Her fish-shaped-cracker cake!
(Yay!)

We're Her little henchmen...
And we take our job with pride!
We do our best to please her...
And stay on her good side!

I've got something, listen now!
This one is real good; you'll see...
We'll leave a present at his door...
Upon there'll be a note to read.

Now, in the box we'll stash and hide...
Until his curiosity...
Entices him to look inside...
And then we'll have him,
One, two, three!

Detach the Wheatley Core!
Release him with a click!
Dig around inside his head,
See what makes him tick!

Detach the Wheatley Core!
Crush him into bits...
Our dear lady GLaDOS is sure to get her kicks!

Detach the Wheatley Core!
Turn him into starch!
He’ll be out of power and She’ll be back in charge! 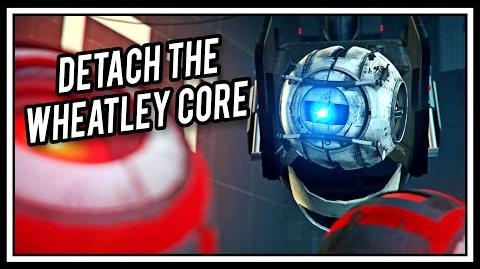